The Ramesh Lab is located at the University of California, Berkeley. Principal Investigator Ramamoorthy Ramesh is the Purnendu Chatterjee Endowed Chair in Energy Technologies in Materials Science and Engineering and Physics at UC Berkeley. Ramesh is also a Materials Senior Faculty Scientific Engineer at Lawrence Berkeley National Lab. 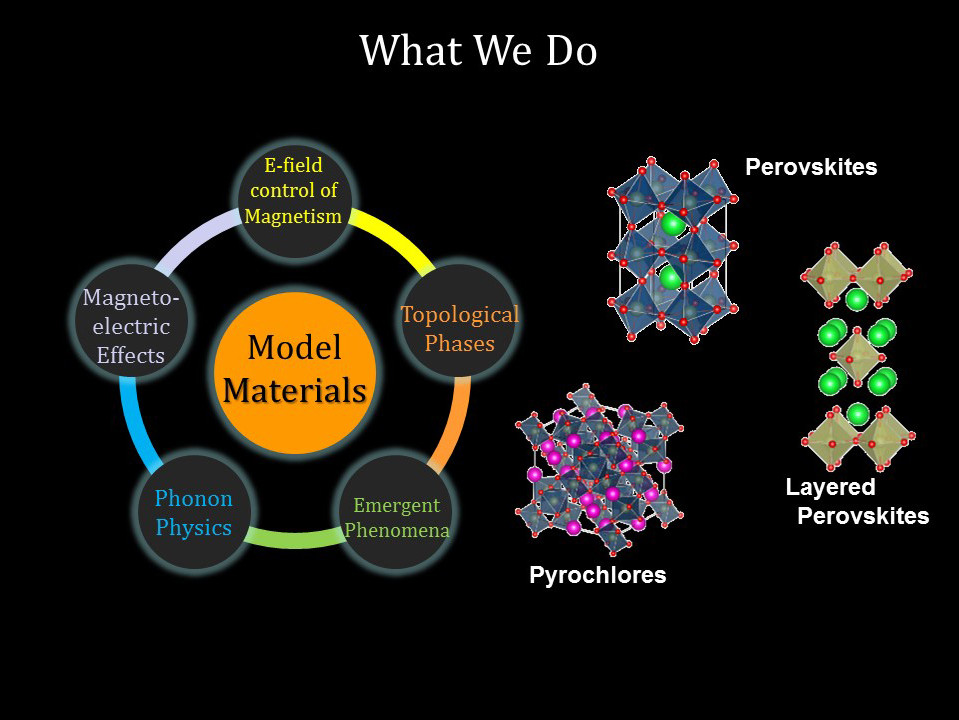 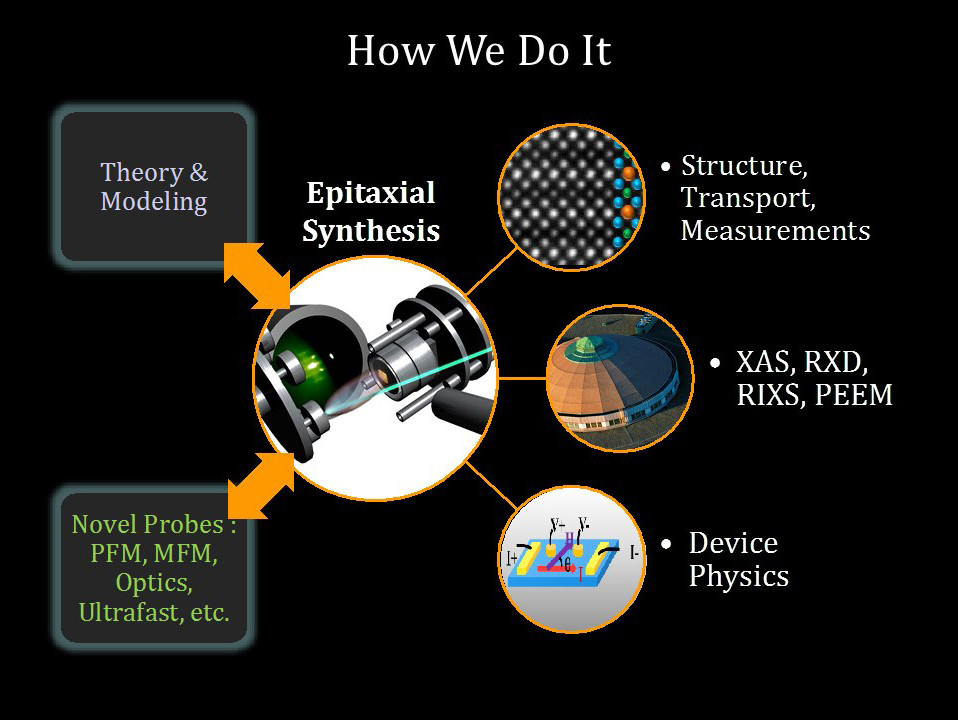 Professor Ramamoorthy Ramesh is known throughout the world for his contributions to the science and technology of complex functional oxide materials.

Ramesh’s research is known worldwide for seminal contributions to the field of complex functional oxide thin film materials. Over the past 20-plus years, his work has spanned the Science and Technology of complex oxide materials. He has made numerous contributions to advanced materials discovery and their impact on technology. In 1988-89, his research was the first to identify the atomic structure of defects in YBCO thin films and the structure and chemistry of the "2223" BSCCO superconductor. His original electron microscopy studies led to the template
approach for the growth of a-axis oriented YBCO films that were used in Josephson junctions.

Ramesh's pioneering work in the field of ferroelectric thin films for nonvolatile memories (FRAMS), first at Bellcore and then as a Physics/MSE faculty member at Maryland, paved the way for a reliable, high density memory technology. He has made numerous landmark contributions in this field. He was the first to demonstrate that conducting oxide electrodes eliminate the 30-year old problem of polarization fatigue, through a careful control of the electrode-ferroelectric interface. This was a critical step in the development of reliable FRAM devices.

His subsequent work demonstrated the fastest switching speed in ferroelectric thin films, another key element that enabled high speed, nonvolatile random access memories. He has extensively studied size effects in ferroelectric thin films, especially as the film thickness is reduced to a few unit cells and lateral dimensions down to 20-50- nm. His work has also demonstrated a novel, approach to create high density ferroelectric capacitors directly on a Si-CMOS structure through the introduction of novel conducting barrier layers.

Ramesh holds more than 20 patents in the field of ferroelectric thin films and devices.

In 1994, in collaboration with S. Jin (Lucent Technologies), Ramesh initiated research into manganite thin films and they coined the term, Colossal Magnetoresistive (CMR) Oxides; their original paper [Science 264, 413(1994)] has been cited more than 3000 times. This work was the starting point for an intense international R&D effort on these materials.

At the University of Maryland, he continued to pursue key scientific and technological problems in half metallic magnetic oxides within a framework of multicomponent oxide thin films and heterostructures, within the NSF-MRSEC that he ran jointly with Ellen Williams. His work
in this field has also led to the discovery of novel field effect devices that combine the properties of ferroelectric and magnetic perovskites [Science 276, 238(1997)].

Coupling of Electricity and Magnetism

In 2000, at Maryland, he switched his attention to coupled phenomena in complex oxides. The coupling between two fundamental forces of nature -- electricity and magnetism -- has fascinated and captivated mankind since the days of Maxwell and Oersted. Indeed, a grand challenge to both science and technology is to be able to control and manipulate magnetism with electric fields (or vice versa, control electric dipoles with magnetic fields). Of particular interest in modern day technology is the tantalizing possibility of controlling ferromagnetism with an electric field, thus enabling a new generation of ultra-low power information storage and communication components, sensors and detectors.

Ramesh's group triggered an avalanche of worldwide research in the field of Multiferroic and Magnetoelectric materials with two landmark papers in Science, one on the antiferromagnetic ferroelectric BiFeO3 [Science 299, 1719 (2003)] and the other on self-assembled
ferroelectric-magnetic nanostructures [Science 303(2004)].

After he moved to Berkeley in 2004, he has continued to blaze a trail of cutting-edge research in this field, with several critical papers expounding the coupling between antiferromagnetism and ferroelectricity as well as the coupling between ferromagnetism
and ferroelectricity. His group was the first to demonstrate the electric field control of magnetism using multiferroics, through several seminal papers, which showed the electric field manipulation of antiferromagnetism [Nature Materials 5, (2006)] and the other on electric field control of ferromagnetism  in a CoFe-BiFeO3 heterostructure [Nature Materials, 7,(2008); Nature Materials, 10 (2010)]. His group also discovered a completely unexplored aspect of these materials, namely that ferroelectric domain walls in such multiferroics are electrically conducting [Nature Materials 8, (2009);Nature Materials 12, (2012); Reviews of Modern Physics, 84(2012) ]. This discovery once again opened up a new avenue for worldwide research activity; many groups around the world are now actively engaged in exploring the
intricacies and potential technological impact of such exotic phenomena.

Following up on this work, his group demonstrated that such domain walls also exhibit anomalously large photovoltages [Nature Nanotechnology 5 (2010)] as well as the discovery of a new “super-tetragonal” phase of BiFeO3 [Science 326(2009)]. His research is now focused on exploring magnetotransport phenomena at such domain walls; for example, they have shown that certain types of domain walls can be magnetic and thus also exhibit large magnetoresistance phenomena. He is also focused on making Multiferroics and Magnetoelectrics a technological reality.

At Berkeley, he has also initiated new research activities in oxide Thermoelectrics as well as oxide Photovoltaics for energy conversion systems, exploring the coupling/decoupling between electronic/photonic/ phononic phenomena in solids.

Ramesh has published more than 500 papers in internationally reputed journals including Science, Nature, Nature Materials, Nature Nanotechnology, Nature Physics and Physical Review Letters. He has been issued 27 patents. He has organized several international conferences and symposia under the MRS, TMS and APS framework, in the area of multicomponent oxides, functional materials and oxide heteroepitaxy. He served on the Editorial Board of Journal of Applied Physics, Applied Physics Letters, Integrated Ferroelectrics, Journal of Materials Research, Japanese Journal of Applied Physics and Journal of Electroceramics. His work is cited extensively (over 65000 ISI citations; H-factor of 111; Google Scholar Citations over 69,000; H-factor 124), which is testament to the high quality and impact of his research work.

In 2001, he was awarded the Humboldt Senior Scientist Prize, the A. James Clark School of Engineering Faculty Outstanding Research Award and Fellowship in the American Physical Society.

Throughout his career, Ramesh has supervised (or co-supervised) more than 70 graduate students, 70 postdoctoral researchers and 50 undergraduate interns in his lab. His students and postdocs are successfully employed in academia, labs and industry worldwide. Over the past two decades (from 1995-2004 at Maryland and from 2004 to the present at Berkeley) his academic research has been funded at the rate of ~1M$/year, testament to his ability to raise sufficient research funding. This coupled with his active leadership roles in various multidisciplinary research activities (such as the NSF MRSEC, SRC-FENA, SRC-WIN, NSF-ERC, etc) illustrates his ability to be both a leader as well as an effective team player.

Through his entire academic career, he has strived to teach undergraduate classes (mainly freshman core courses), because of the sense of satisfaction of having contributed to the educational advancement of the younger generation. These courses are typically quite difficult to teach due to the large number (generally ~200) of students and the logistics of running such courses.

As leader of the Energy Technologies portfolio, which has annual research funding of ~$125M Ramesh formulated five strategic themes:

In this role, Ramesh strengthened the organization through the hires of key personnel, transformation of the research agenda and launch of a diversity fellowship. He also established a strong symbiotic relationship with the College of Engineering, College of Environmental Design and the Goldman School of Public Policy at U.C. Berkeley. He has recently launched a named diversity fellowship (The John Newman Fellowship) to enhance diversity within the technical ranks. Under his watch the funding has grown by ~15-20%.

Ramesh managed one of the nation’s largest research and development programs (the largest multi-purpose, Office
of Science laboratory), with annual research expenditures of ~$1.5 billion in materials and physical
sciences, energy and engineering, computational sciences, biological and environmental science, neutron
science, and global security.

He started several new initiatives, including Energy Systems, Urban Dynamics, and establishment of stronger ties between basic
science and global security. He also brought a strong focus on diversity and inclusion by launching a new
fellowship (The Lian Russell Fellowship) directed towards women and minorities.

This ~$300M-a-year initiative aims to bring the cost of Solar Electricity down to grid parity (~5c/kWh) by the end of the decade, without the assistance of federal
and/or state subsidies. Sunshot is now acknowledged to be a big success of the Steve Chu tenure as Energy Secretary. The entire R&D porfoloio of the Energy Efficiency and Renewables Office (~$1.9B) is being modeled after
Sunshot in terms of active program management.

The funding activities within SunShot span the entire “Technology Readiness Level” (TRL) spectrum, from the basic science of photon to electron conversion
to reduction of market barriers to deployment.

Worked closely on all aspects of the functions of the department, including a key role in the hiring of several new
faculty members, fundraising, space allocations, preparing promotion cases, etc.

Leader of a team of Berkeley faculty establishing a research institute funded by the National Research Foundation, Government of Singapore. SINBERISE is funded at the level of ~38M$
(Singapore dollars) and is focused on creating low cost Photovoltaics (Photon to Electron) and exploring
Photocatalytic pathways to fuel production (Photon to Fuel). The institute is formally established in
Singapore and will involve Berkeley faculty spending significant periods of time there to foster the
research collaborations between Berkeley and the two Singapore partners, NTU and NUS. Ramesh re-
assumed the role of Director of RISE upon his return from his tenure at DOE and put together a team of
24 faculty members in Singapore, ~ 60 students and postdocs.